Update 1.2 brings you closer to the screen

A new update is available for The Adventures of Elena Temple, bringing with it a resolution to the much requested fullscreen feature. The reason I've been avoiding to have such an option until now is because I didn't feel the game lent itself well enough to be rendered fullscreen. The game area of only 240x160 pixels rendered on a Full HD screen or even bigger didn't feel right, first because each pixel in the game area became way too big and second because the aspect ratio didn't match, leading to some weird cropping especially on some of the virtual platforms. 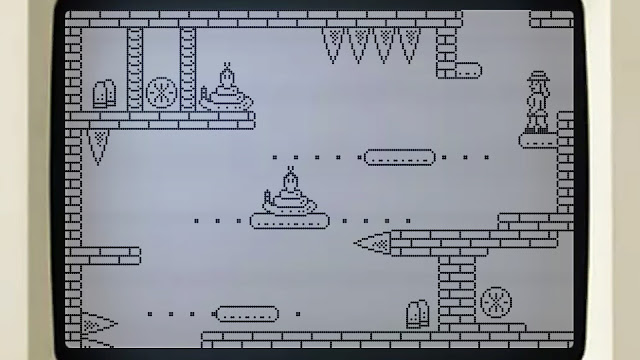 My solution? A zoom in/out functionality! You can get closer to the virtual screen or further away using the gamepad trigger buttons or '[' and ']' on your keyboard - yes, I know, a very programmer's choice of keys here! The zoom factor is saved for future sessions too, as long as you don't change the virtual platform or the display resolution - if you do, it just snaps back to its default zoom factor and you'll need to readjust to whatever works best for you, for the current combo of virtual platform and display resolution. This can also be used as a small trick to reset the zoom factor to its default state - just choose another virtual machine and then switch back to the current one and voila, default is back in fashion!

The update also includes some small level tweaks and a fix for a super rare bug of not unlocking the achievements related to collecting the secret scrolls.

I hope you enjoy the new zoom functionality and hopefully you'll find it an elegant solution to not being able to render the actual retro game fullscreen - it still won't be completely fullscreen, but it will be as near as possible while still maintaining a good looking crop. Plus it gives the chance to everyone to be as close to the virtual screen as they like! Just don't blame me if your virtual mom yells at you that you'll ruin your virtual eyes from staying so close to the virtual screen!

Thank you again for playing The Adventures of Elena Temple!