The final release date is getting closer and closer! That March deadline I set for myself seems right around the corner!

But I'm getting ahead of myself. First let's check out what's new in this freshly released version:

Let's go over the new game mechanics available in v0.5.0. The coolest one is definitely the bat, flying around the levels, in a zig-zaggy pattern. Either shoot it or adapt to its movement and avoid it. Then there's the new type of platform, crumbling soon after you step on it, so be sure to not linger too much on it. And, finally, the cactus, which is a neat element to use for puzzle rooms. You can shoot it to get access to whatever area it's blocking, but unlike the destructible walls, the cactuses do respawn once you exit the screen, so take that into account when planning on what to spend your precious bullets. While the cactus might look a bit ominous, fret not, as it doesn't cause any damage - you can even land on it and then jump to otherwise inaccessible platforms. 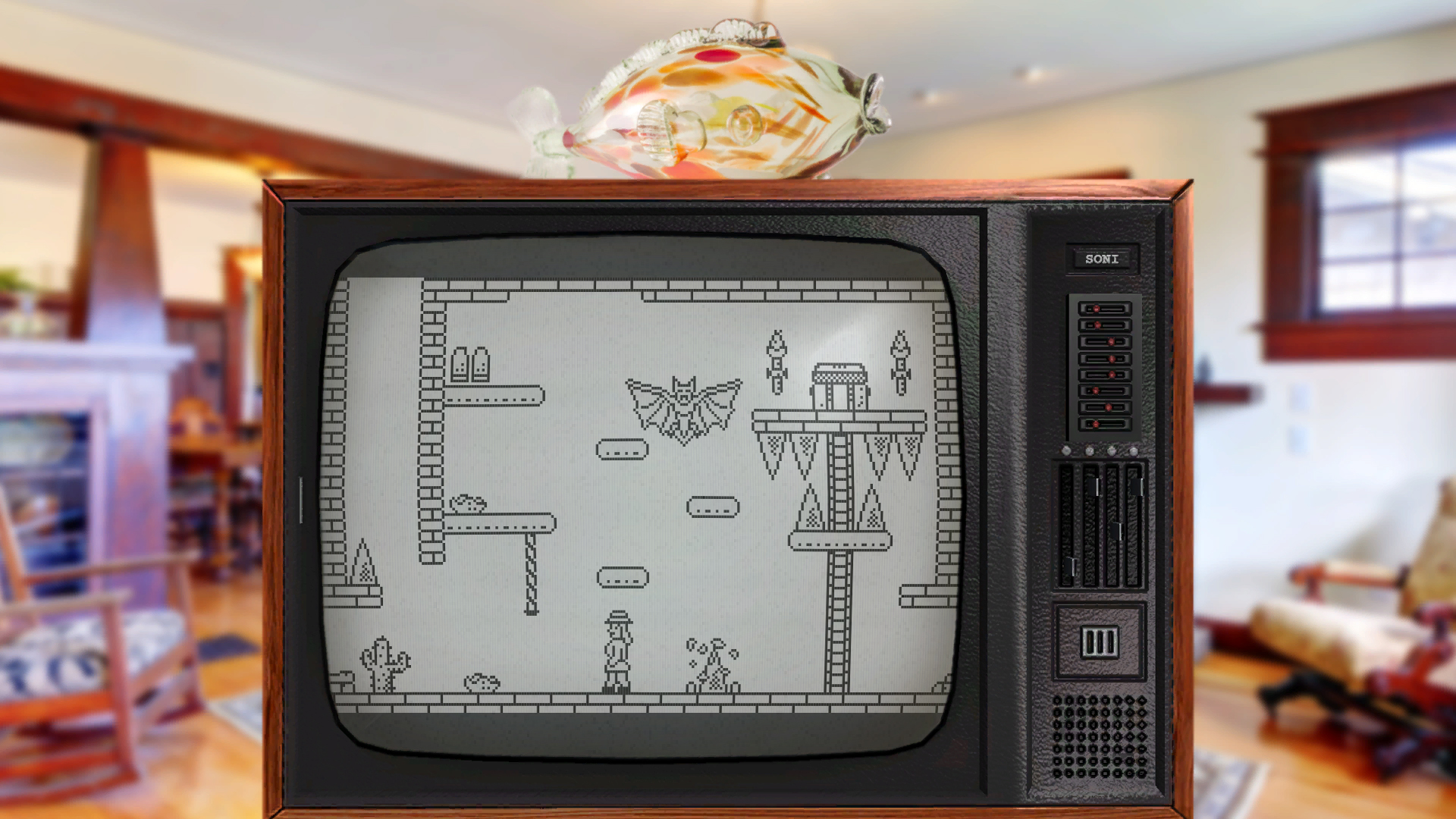 The 11 new dungeon rooms were created using these mechanics. And I also created 2 new secret rooms and revamped the old one a bit. And this time around they're not empty anymore! All in all, there are now 38 screens in the game to explore and complete.

These are the collectibles you can find in the secret dungeon rooms. There are 3 of them, each providing you its own map info once collected. I don't want to over-spoil them, so I'll just let you check out the below screenshot with how the map looks once you collected all 3 secret scrolls. 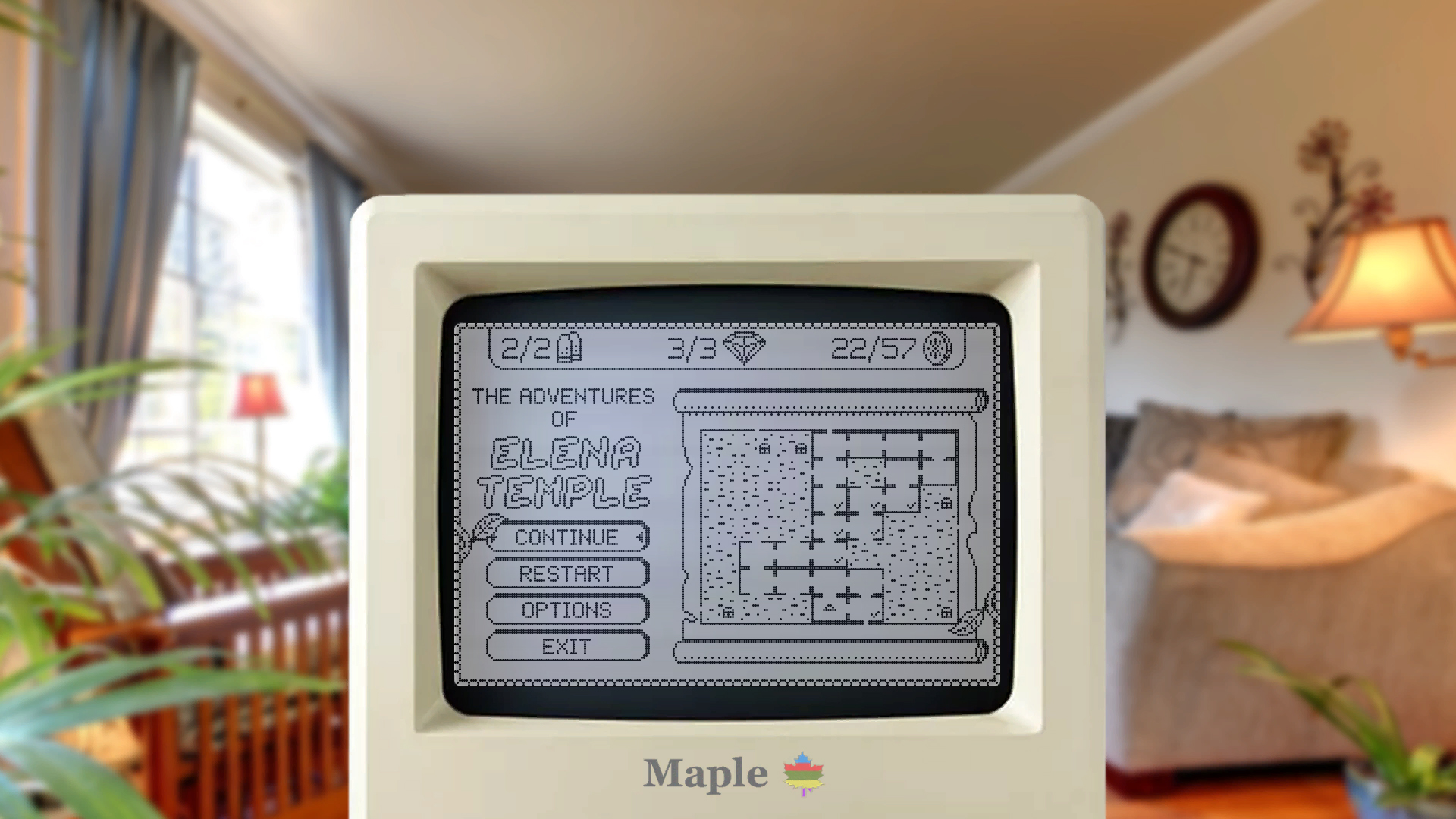 The dungeon in The Adventures of Elena Temple consists of a total of 55 rooms. There are the 4 areas of 11 screens each, with 3 unique mechanics per area. Then there are 3 secret rooms, the tutorial room and the hub room in the center. Aside from these, there 2 final areas, each blocked by a Guardian statue. The first one, with 4 advanced rooms, is protected by the Coins Guardian - you'll have to collect enough coins first before he'll grant you access. And the second one, with 2 end of the game rooms, is guarded by the Gems Guardian - you'll have to collect all the gems in the dungeon to get past it. It'll be worth it though, considering the surprise that awaits you at the end!

Aside from the new features described above, there were also a few tweaks and bug fixes. But those are no fun for anyone, so why don't you better watch this new version in action in the video below:

The main reason why it took me so long to release this update was that I spent a lot of time this month with paperwork and legal stuff. I created my company so I can sell the game on Steam, which came with its own share of bureaucracy. Then there was onboarding on Steam, which is simple enough if you have all the data handy, but as I needed to apply for treaty benefits, researching that part was a pain. Thankfully, everything was well in the end, I got approved for Steam and the game's store page is currently under review, to be made live in a few days.

There's also another platform I started the process with, but that's going to take a while more. I'm still waiting on some legal stuff from my local authorities, then I can advance the process with the platform holder. The good part is that I was accepted, so there shouldn't be anything blocking me going ahead with them. It just might take some while, considering the porting, certification and all that. Yes, I know I haven't told you what platform it is, but I don't want to jinx it! I'm terribly excited about it, though! I've never been so happy reading technical docs before!

The features below are what I plan to include in v0.6.0 - by the way, my versioning is purely seat of the pants, so don't be surprised if at some point I jump straight to v1.0.0 or something.

v0.6.0 might be the last Early Access version, or there might be a v0.7.0 too, I'm not yet sure. As I said in the beginning of this post, the final release date is scary close, so there might not be any reason or time to put out another version, but we'll see how things go.

I'll be attending Indie Garden Assembly 2018 next week, in Valenciennes, France. I'll be showcasing The Adventures of Elena Temple there on Friday 9th, so if you're in the area please come say hi and maybe give me some live feedback!

Thank you for reading!